Family Link is an adoption and foster agency located in Gonzales Texas.  They are opening Legacy Ranch in Gonzales to provide critical services to children, families and elderly people in need.  Legacy Ranch is a

“Multi-generational Foster Family & Senior Citizen Community: a foster family community and retreat center where no child will be turned away and lives will be changed.”

We were asked to contribute to this project by Matt Bailey of Masters Touch Custom Homes here in Austin.

We also read about them in the Lockhart Grace Lutheran Church’s newletter:

“FamilyLink, a nonprofit Christian foster and adoption agency that specializes in keeping siblings together is opening Legacy Ranch Multi-Generational Community on Highway 183 in Gonzales County on the site of the former BCHM Youth Ranch.

The ranch’s 156 acres on the San Marcos River will be home to children, pregnant teens and even senior citizens who’ve experienced elder abuse or neglect. The agency seeks volunteers and potential foster parents to live at the ranch. Free training is provided for those who are interested. Please contact Stacy Palm at stacy@familylinkkids.com or visit familylinkkids.com for more information.”

We spent the day down in Gonzales on Tuesday putting in some countertops. We thought you might like to see some of the photos.

Please take a moment and give Stacy Palm a call and ask what your family, your business, or your organization can donate to the ranch, or do for the ranch, to help these children and families in need. 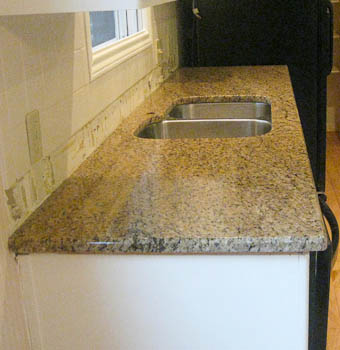 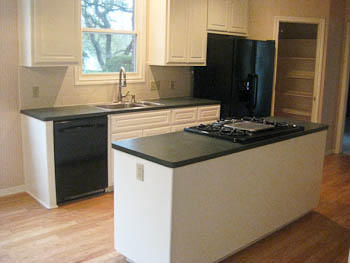 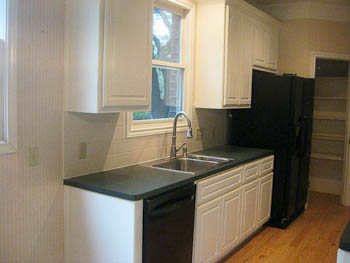 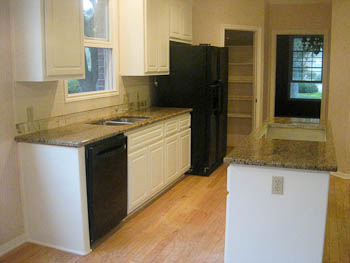 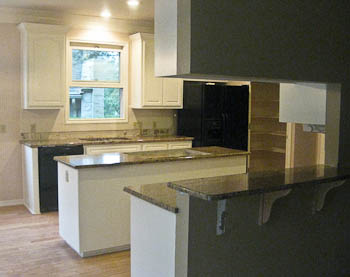 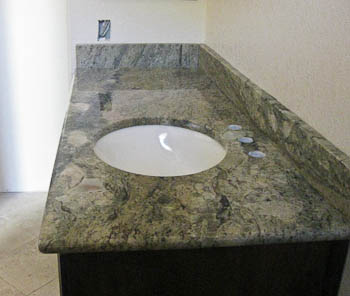 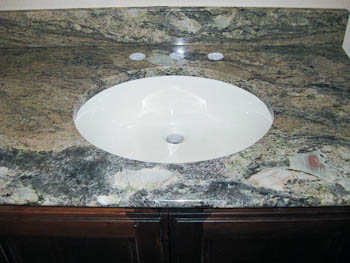 Check out this surf green granite. It has big, colorful chunks of green and salmon and some ivory as well.

The granite edge profile is a full bullnose, so it is rounded on the top at the bottom. The undermount sink is one we sell here at the shop – a simple, white oval that allows for maximum countertop space.

The curves in the surf green granite backsplash are an optical illusion – they’re actually straight and even. These are 4-inch backsplashes which is typical, although lately we’ve had clients asking for tallers ones, like 5-inches or even 6.

The cooler colors in this unusual granite go well with the dark brown cabinets for this bathroom remodel, and also work well with the grey-ish tone of the paint color on the wall.

I wish I had a photo of the original slab before it was cut up to share. As many times as I walked past it and ran my hand across the front (while murmurring “lovely!”), I never managed to have my big camera in hand.

Unusual and colorful granite like this one is usually the focal point of the room. The paint colors, cabinet colors and tile all need to complement the colors in the granite (complement, not compete with).

Many designers will wait to pick the final paint colors until after the granite has been installed. That way, different colors can be “auditioned” on the walls next to the actual granite.

After the granite is cut by your fabricator, a piece of it can be available for shopping. It can be hard to get an exact sample before the counters are fabricated since stone like surf green granite varies so much from slab to slab. Once the slab is cut, however, the fabricator can safely break off a piece for you. 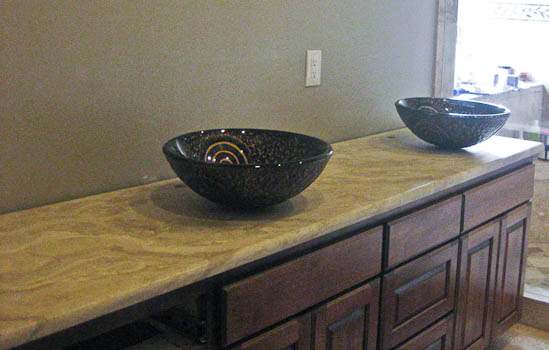 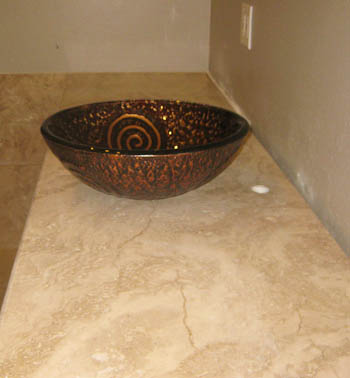 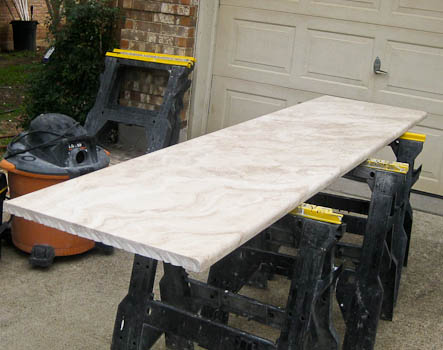 We had a nice long piece of travertine here at the shop last week.

Now it has a new home as a master bathroom vanity top with a beautiful pair of glass vessel sinks.

The inside photos don’t do this natural stone justice. The outside photo is much more accurate for the coloration and natural variation across the surface of the travertine. The colors in this stone range from a pale cream to a medium-tan, with some darker striations. The cabinet is a medium-to-dark spice brown wood.

One thing to make note of: if you use travertine for a bathroom vanity top, make sure to seal it regularly with a heavy-duty sealer and keep things away from it like hair dye, which can stain it. 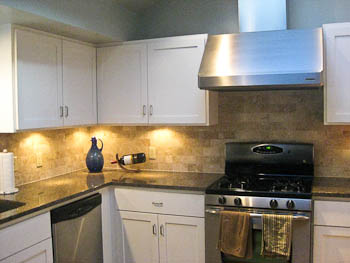 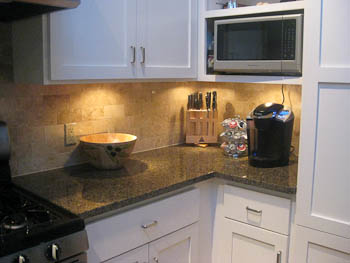 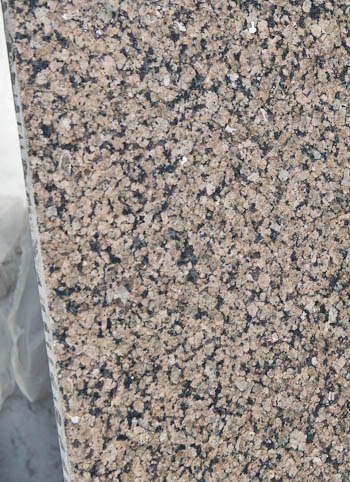 Tropical brown granite looks marvelous with the white cabinets in this Austin kitchen.

(Pardon the grainy photos – we only had a point-and-shoot camera on us that day.)

These granite countertops have a flat-polish edge profile. We see this profile on all sorts of kitchen styles, from uber-modern, to mid-century modern, to transitional, and even in quite a few traditional kitchens. It’s an edge profile that plays nice with everything. (It’s what we have in our own Austin homes, too.)

The subway tile backsplash is a nice, smooth cream marble. And, yes, that is a tropical brown granite window ledge made to match the kitchen countertops. 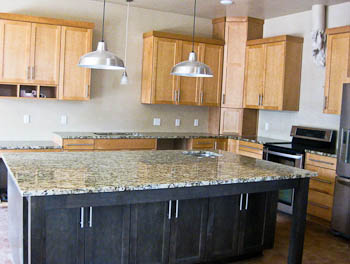 Want a Giant Island in Your Lago Vista Kitchen? 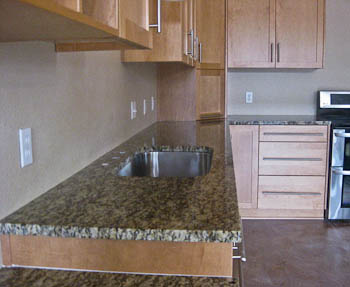 Check out the really pretty custom cabinets under this Santa Cecilia granite island in this new kitchen in Lago Vista, Texas.

Santa Cecilia is one of those granite colors that looks good with almost any cabinet color and style – from very traditional to transitional styles such as this one. These granite counters have a flat-polish edge.

The warm colors in the granite also look great with almost any cabinet colors from white, through the browns and even with the darker colors like this island.

Notice that this Lago Vista kitchen has a single-bowl undermount sink. The sink is just huge – big enough to bathe a small child or a medium-sized dog.

Although our focus is the Austin granite market, we also work with homeowners in some of the surrounding communities such as Lago Vista.