Got an Old Bathroom? 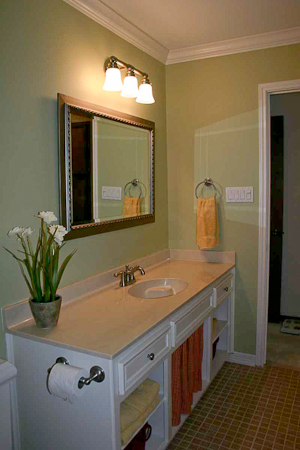 If you live in Austin, Texas, chances are your house is a little, um . . . older. Older house means older bathroom vanity tops, and older bathroom cabinets.

And that means making some decisions about which materials to use.

Sometimes it’s fun to go with something really trendy, and sometimes you just want something that will endure the test of time.

This bathroom is in a vintage 1980s home in NW Austin. The house was well-built and the cabinets were sturdy, so it made more sense to paint them than to rip them out.

The first round of remodeling was completed in 2006 and all was fine. 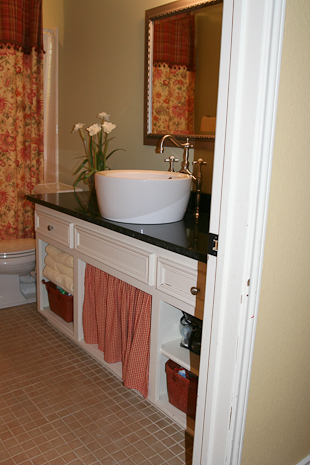 Flash forward 5 years and three little kids later and some of the stuff from the original remodel needed to be replaced. The first round of floor tile was replaced with an eco-friendly porcelain tile which was also used in a new shower surround.

The original doors on the cabinet were replaced with custom doors from Austin’s own Patton Cabinet Doors, and the whole cabinet was repainted. Notice that the Uba Tuba granite vanity top looks as good in 2011 as it did in 2006.